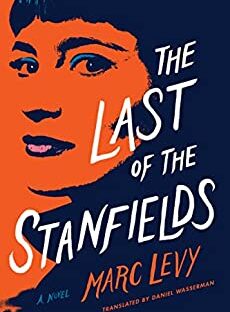 This is the third book I’ve read/listened to by Marc Levy. The first, The Strange Journey of Alice Pendlebury I really enjoyed. The Second, All Those Things We Never Said, I enjoyed but did find it a little strange and long winded. I went into the Last of the Stanfields not really knowing what to expect apart from the difficulty in translation. I listened to the book on Amazon Kindle Unlimited as it is a cheap way of borrowing books to listen to and you are not restricted to one free book per month like with Audible. I’m still a member of Audible though as they have more choice of books. All my links are affiliate links so I may earn some money if you click through and buy, but it will be at no extra cost to you. Thank you in advance for your support.

The Last of the Stanfields

I did listen to the sample and I thought the narrator was okay, but I have to admit that Stina Nielsen did grate on me after a while. She sounded too ‘posh’ and read too ‘literally.’ Braden Wright was fine though.

A mystery, a love story, and a search through a shadowy past. Two strangers unite in this novel of family secrets by international bestselling author Marc Levy, the most read contemporary French author in the world.

When London journalist Eleanor-Rigby Donovan receives an anonymous letter alluding to a crime committed by her deceased mother, her life is turned upside down. It points her to a bar on the Baltimore Harbor, where she finds a stranger who has received the same mysterious letter about his own mother. Together, Eleanor-Rigby and this young man, George-Harrison Collins, embark on a quest through the shadowy past of the Stanfields, a moneyed Maryland family full of unimaginable secrets. These secrets will transport them back decades, across continents, and to a mysterious crime long buried…until now.

I was really intrigued by this story despite it being a little long winded again. The story jumps around a lot from 1980, to 2016 and even way back to the 1940s. It was really interesting following the historical background to Eleanor-Rigby and George-Harrison and the mysterious letters they both receive. The story binds together well with a satisfying ending and a few little twists and turns along the way.

It was like dipping into a whole other book reading about Eleanor-Rigby’s grandparents during the war and how they survived and recovered their status once escaping to America.

There is a lot going on this book and most of it is interesting and managed to keep me going until the end. Some things were predictable but there were also some little surprises.

Here are some more places you can purchase the book for yourself if you are interested.