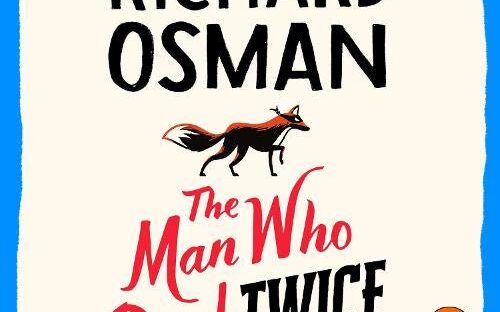 Despite my disappointment in Richard Osman’s first book, The Thursday Murder Club, I have nothing but praise for his second book, The Man Who Died Twice. Looking back I think I was a little harsh on The Thursday Murder Club as I did really enjoy it in the end. I think that maybe I wasn’t feeling so good when I started it and that’s why I couldn’t concentrate on the story. I’m telling you this because ‘The Man Who Died Twice’ is really a sequel and refers to the first book quite a lot.

This post contains affiliate links that may earn me a little money if you click through and buy, but at no extra cost to you. thank you for your support x

The Man Who Died Twice

Elizabeth has received a letter from an old colleague, a man with whom she has a long history. He’s made a big mistake, and he needs her help. His story involves stolen diamonds, a violent mobster and a very real threat to his life.

As bodies start piling up, Elizabeth enlists Joyce, Ibrahim and Ron in the hunt for a ruthless murderer. And if they find the diamonds, too? Well, wouldn’t that be a bonus?

But this time, they are up against an enemy who wouldn’t bat an eyelid at knocking off four septuagenarians. Can the Thursday Murder Club find the killer (and the diamonds) before the killer finds them?

I listened to The Man Who Died Twice on Audible and it was narrated by the lovely Lesley Manville who did a fabulous job. I think my problem with the first book was that these old people were not like any old people I’ve ever known (well, some of them.) But they are NOT like any old people you would meet, they are special and really quite wonderful in their own way.

The story was exciting from the start and Richard writes some long winding books, but each thread leads somewhere. The story was fascinating and I couldn’t stop listening. I felt so disappointed that it had to end. That’s surely the sign of a good book. I have to admit, that finding out who The Man Who Died Twice actually was, is a touch of genius and it nearly broke me.

The characters that Richard Osman introduced us to in the first book, develop and grow in this one and we get to know them better. My heart broke for poor Ibrahim but he’s got some good friends. I loved Ron’s grandson Kendrick, and how Ron insists on calling him Kenny or Ken. I guess Kendrick is just a little too modern for him.

Elizabeth becomes a force to be reckoned with, but her sidekick, Joyce, also proves her worth.

The book is full to the brim of entertaining storylines, it’s a captivating story of friendship, love, crime, death, revenge, suspense and a satisfying, if a little surprising, ending. Richard Osman is certainly a great story teller.

The book is mainly told in the third person, but it also has diary entries from Joyce. The humour is subtle but definitely hits the spot.

Just like the first book the story is over the top and unbelievable but Richard tells it in a way that makes you believe it. I’m looking forward to the next instalment already.