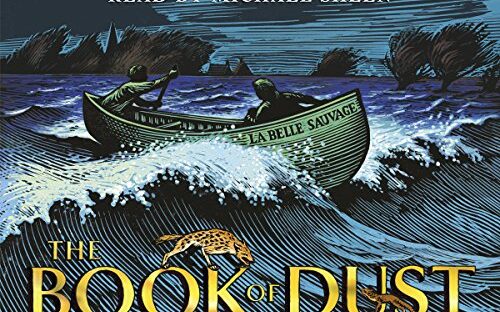 I have had a copy of La Belle Sauvage on my bookshelf since it was released but I had not read it. When I saw that the Audible book was read by Michael Sheen I was too tempted and used my monthly credit. I regret nothing.

The Blurb and My review

There is not much blurb on this book so I’ve combined it with my review.

Eleven-year-old Malcolm Polstead and his dæmon, Asta, live with his parents at the Trout Inn near Oxford. Across the River Thames (which Malcolm navigates often using his beloved canoe, a boat by the name of La Belle Sauvage) is the Godstow Priory where the nuns live. Malcolm learns they have a guest with them; a baby by the name of Lyra Belacqua….

I first bought His Dark Materials for my son when he was a teenager and he loved the first book, so I bought him the next in the series which he didn’t enjoy so much. But I did, and I continued with the third book which was by far the best and so devastating that it lived with me a long time.

I have also watched the film, The Golden Compass which I enjoyed, and so did my son. But the television series was even better even if it did mix up the timeline of the books. I can’t wait for the next series.

Of course I had to buy La Belle Sauvage, or The First Book of Dust as soon as it was released, but for some reason I didn’t get around to reading it. It sat on my bookshelf gathering dust (sorry.) I also bought the second book because apparently I had them both on pre-order.

Then I spotted La Belle Sauvage on Audible and like I said, I couldn’t resist being read to by Michael Sheen. I really enjoyed the story where we are introduced to the baby Lyra and her rescuers two children.

If you’ve never read any of the series this book would definitely stand alone as there is no reference to the future books (Which were written in the past.) But, if you have read them then you will recognise the names of some of the characters. It was weird having Lyra, one of the major characters in the original books, being just a little baby. She’s already proven to be a survivor against all odds though.

The story sets the scene for future adventures.

The story is a fantasy and borders on the ridiculous at times, but that’s what makes it so interesting and fun. At times, I felt like Michael Sheen was reading like he would to a child with his excitement rising and speeding up at the ‘dangerous’ parts of the book. But overall I enjoyed listening and would definitely continue the story this way.

Are you familiar with His Dark Materials or the Book of Dust?

You can also buy the book on Amazon and this is my affiliate link.

2 thoughts on “La Belle Sauvage, The Book of Dust 1 by Phillip Pullman”