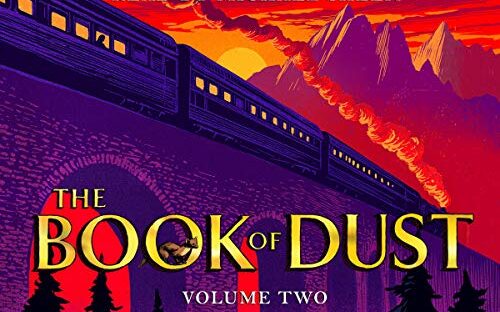 The Book of Dust 2, The Secret Commonwealth is the second book in the revived series of His Dark Materials. I’ve been a fan of Philip Pullman’s ‘His Dark Materials’ series since I bought my son the first book, Northern Lights, in the late 90s. I read the entire series and I’ve also enjoyed the film, The Golden Compass and the television series.

It was a long wait until the next series, The Book of Dust and even though I had the book I didn’t read it but devoured the audio recording which was read by Michael Sheen. Then I decided I had to listen to the second Book of Dust, The Secret Commonwealth.

It is 20 years since the events of La Belle Sauvage: The Book of Dust Volume One unfolded and saw the baby Lyra Belacqua begin her life-changing journey.

It is almost 10 years since listeners left Lyra and the love of her young life, Will Parry, on a park bench in Oxford’s Botanic Gardens at the end of the ground-breaking, bestselling His Dark Materials sequence.

Now, in The Secret Commonwealth, we meet Lyra Silvertongue. And she is no longer a child….

The second volume of Philip Pullman’s The Book of Dust sees Lyra, now 20 years old, and her daemon Pantalaimon, forced to navigate their relationship in a way they could never have imagined and drawn into the complex and dangerous factions of a world that they had no idea existed. Pulled along on his own journey too is Malcolm; once a boy with a boat and a mission to save a baby from the flood, now a man with a strong sense of duty and a desire to do what is right.

Theirs is a world at once familiar and extraordinary and they must travel far beyond the edges of Oxford, across Europe and into Asia, in search for what is lost – a city haunted by daemons, a secret at the heart of a desert and the mystery of the elusive Dust.

The Secret Commonwealth is truly a book for our times; a powerful adventure and a thought-provoking look at what it is to understand yourself, to grow up and make sense of the world around you. This is storytelling at its very best from one of our greatest writers.

My Review of The Secret Commonwealth

It was a huge leap from baby Lyra to Adult Lyra, but those who have read all the books will know that the ‘His Dark Materials’ series happened in-between these two books. Do you have to read all the books? I’d say that you could read the Book of Dust series without having to read ‘His Dark Materials’ but there are characters mentioned that you will have not heard of. Will, Lyra’s love interest for one. He’s not mentioned in the first book because Lyra is just a baby, but she does mention her feelings about him in the second book without any indication of why they are not together or where he is. (He is in fact in another dimension, and it is unlikely that they will ever meet again, but you would not know this if you had not read The Amber Spyglass.) You also would not know what happened to her parents, best friend and the Bear King, all of whom are mentioned but without context.

This book is full of action from beginning to end and it really is a great read. I do think that Lyra is immature in the first few chapters, but losing her daemon, Pantalaimon (Pan), makes her realise that she may have been taken in by some of the philosophy she has been reading. She begins her journey to find Pan, but it’s a dangerous one from many angles. We see Lyra grow up a little more and begin to understand that it’s difficult to trust anyone. She also finds some interesting characters on her journey who help her.

The book ends on a massive cliffhanger and we have to wait until around next September for the third book in the series.

Philip Pullman may write in a different universe to ours, but the similarities are stark, and it is clear he is trying to get some political and theoretical stories across along with his fantasy story. I love that he has named some of his characters in dedication of real life people.

Alison Wetherfield; A Lawyer and fighter for women’s rights who passed away suddenly in 2012.

Bud Schlesinger; It’s difficult to find out who exactly this person is, but there is a reference to the Schlesinger name in the obituary of Alison Wetherfield.

Nur Huda El-Wahab: a 15 year old victim from the Grenfell Tower fire. Pullman held an auction to raise money for the victims and included Nur Huda in his book. She doesn’t feature much in this story but will have a much bigger part in the third book. Lyra meets her right at the end.

A lot of people complain in reviews that Lyra is not the same as the Lyra that we see in His Dark Materials, and after all she’s been through, we would expect her to be different. But, Pullman does explain that her reading of certain books and conspiracies has changed her thinking and, as Pan puts it, they have taken her imagination. That’s why Pan leaves her, and we see as the book progresses that Lyra is finding herself again. I think we will have the ‘old’ Lyra back in the next book.

Also, some people don’t enjoy Michael Sheen’s recording of the books, but I do and I guess it’s a personal choice. (I always listen to the sample of the recording before choosing a book because there are always voices that will not be to your choice.) More titles to explore than ever in Kindle Unlimited