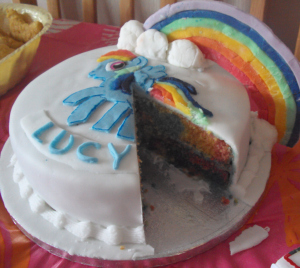 I used to write a blog about cakes. I made a lot of cakes for many people, some I was more proud of than others but I really enjoyed making them. I find it difficult to make cakes now as it is a lot of work for me, but I’ve decided to re-visit some of my cake makes and put them here. Here is one I made many years ago, A My Little Pony Cake, but it’s still one of my favourites. I look at it now and I know how amateur it is and how I could have made it better, but it’s not always perfection that matters.

For my daughter’s 7th birthday she wanted a My Little Pony cake, in particular a Rainbow Dash cake.

I decided to do an 8″ round cake featuring Rainbow Dash and a rainbow. For a little twist I decided to make the actual cake rainbow coloured and the keep the icing white.

I made up the cake mix and then split it into 6 equal bowls. I then added food dye to each bowl, using red, orange, yellow, green and blue. I decided against using indigo and used a violet coloured buttercream. I put the mixture into the cake tin in concentric circles starting with an outer ring of red and working down to the blue in one half, then doing the opposite in the other, i.e. blue to red.

I then baked the cake, trimmed it and filled it with butter cream. Then I put a layer of butter cream over the cake and put it in the fridge.

I covered the cake in plain white icing. The rainbow I made using my coloured fondant. Unfortunately the red fondant had become brittle and difficult to work with and I had no time to wait until I could buy or make some more. I had no choice but to reverse the rainbow so the red would be the smallest amount of colour used. Rainbows actually go from red on the outside down to violet on the inside. I had to make mine the other way around and hope that no-one noticed. (My eldest daughter noticed straight away) The rainbow was made on a piece of card as I realised it would be the only way to make it stand up.

The pony I made myself by cutting out pieces of fondant and placing them on the cake. I used this template to help. I was a little worried that if it went wrong I would end up with a big mess, but my back-up plan was to cover the area with a white disc and start again. Luckily this didn’t happen as I was quite happy with the result. I then added the rainbow and fixed it in place with icing clouds. I also piped around the outside bottom edge of the cake and added my daughter’s name.

I was nervous about how the cake looked inside. I have made rainbow cakes before but always used thin slices of coloured sponge cake fitted together with butter cream, but I have found these to be a little sickly. This method was an experiment and I had no idea how it was going to look until I cut it open.

It might not be perfect but it was a big hit at my girls party.

I’m hoping to bring you a few more cake posts including my favourite cake recipes.

3 thoughts on “My Little Pony Cake”