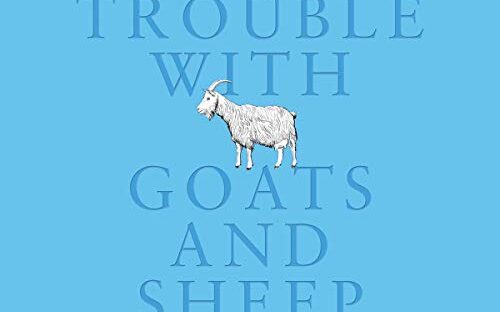 I recently read A Tidy Ending by Joanna Cannon and I loved Three Things About Elsie by the same author. It occurred to me that I hadn’t read an earlier book The Trouble with Goats and Sheep.

I listened to the book on Audible which is the way I ‘read’ most of my books. I always advise you to listen to the sample first to make sure you are happy with the narrator because you will be listening to them for a long while. You can join Audible and get your first book for free for 30 days. Then it’s £7.99 per month for one credit which can be used against any book of your choice. You also get a lot of special offers and freebies.

I am an affiliate of Audible and if you purchase something from one of my links I may earn a little money but at no extra cost to you. Thank you for supporting my blog.

England, 1976. Mrs Creasy is missing, and The Avenue is alive with whispers. As the summer shimmers endlessly on, 10-year-olds Grace and Tilly decide to take matters into their own hands. And as the cul-de-sac starts giving up its secrets, the amateur detectives will find much more than they imagined….

My Review of The Trouble with Goats and Sheep

I think the main reason I loved this book is because I could have been Grace, the young girl who is the main narrator of this book. I was also 10 years old in the summer of 1976 and have fond memories of the long hot summer holiday. I was a bit of a misfit but I had a best friend who followed me around everywhere. I went to church and wanted to find God. We even had Asian neighbours move in, they had the most delicious sweets and the most exotic names. Everyone in the street knew everyone else and their business, although there must have been secrets behind closed doors. I believe my Mother could have been Mrs Creasy because she talked to everyone! Saying that, Mrs Creasy is the missing woman and my Mum never went away.

We also had a house fire in our street but no-one died. There was a lot of speculation about the cause but the family disappeared, my Mum called it a moonlight flit! But in this story the fire was probably not an accident and it was probably Mrs Creasy that knew what happened. What did she know and why did she go away? Joanna Cannon really likes to leave you guessing.

A few more fond memories of 1976, Angel Delight for Sunday tea, Monopoly on my friends kitchen table, the Kays catalogue which I’d read and circle what I wanted, Tiswas on a Saturday morning, poncho’s, stylophone and even Jackie magazine…although I was more of a Beano reader at 10. I’d also go to the library for an armful of books every week. (Did I enjoy the story or just reminiscing?)

The story flits between 1967 when a baby goes missing and the house fire happens, and 1976, the long hot summer when Mrs Creasy goes missing and Grace and Tilly turn detectives. Jesus on the drainpipe was a little bit of a weird twist, but it was a bit of a crazy hot summer and people do find strange ways of connecting and occupying their days.

I loved the way the story developed and involved every character. It highlighted that even in the closest of communities there are always those that don’t fit in.

Joanna Cannon leaves unanswered questions in all of her books, which can maybe be frustrating but it’s good for igniting your imagination. What was the third thing about Elsie? How did the murders occur in A Tidy Ending? Who started the fire at number eleven? Some might find it frustrating, but I like a book that leaves you guessing.

I listened to the book on Audible and the narrator was Paula Wilcox who was absolutely brilliant at capturing both the children and adult characters of this book and transporting you right back to the avenue and the summer of 1976. Which was rather hot!

My Review of A Tidy Ending by Joanna Cannon

My Review of Three Things About Elsie by Joanna Cannon