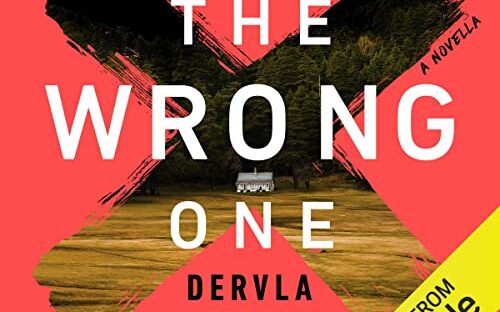 I needed something to pass a little time and found this novella on Audible as a free listen, so I thought why not. This is my review of The Wrong One by Dervla Mc Tiernan.

In this new novella from the number one internationally best-selling author of The Sisters and The Murder Rule, Dervla McTiernan, a mother and son fighting to prove her innocence are reunited with an estranged friend—a detective who may hold the key to her freedom—as they’re forced to put their differences aside to uncover the shocking truth behind the crime.

When Clara Coleman is taken into custody, her teenage son, Sebastien, wastes no time before calling Simon Miller: an estranged family friend and detective in their old hometown of Hartford, Connecticut. Clara’s been arrested for the murder of Rachel Stapleton, a wealthy housewife and prominent figure in Lavender Valley, their well-to-do New Jersey suburb. But she swears she did not commit the crime.

Simon knows that Clara is not capable of murder and will do anything he can to prove her innocence—he’s felt indebted to the Coleman family since her husband, Will, Simon’s best friend, passed away years before. He arrives in Lavender Valley and hits the ground running on the case. With time, details surrounding the crime as well as the Colemans’ family history are revealed, unravelling the complex web of cause and effect that will finally bring the truth to light.

Please note: this audio contains strong language, distressing situations and descriptions of violence that some listeners may find upsetting. Discretion is advised.

My Review of The Wrong One

Narrated by the detective and the son alternatively it tells the story of a mysterious murder and the Mother, Lydia, in in the frame for it.

You get the impression that the Connecticut detective, Simon, is really good at his job and will soon get to the bottom of this mess and his friend’s wife will be released.

It was Lydia’s son, Sebastien, that called Simon, so why do we get the impression that he doesn’t actually like him?

The clues are there in this fast paced novella but the ending is a bit of a shocker and little bit too far fetched. I can’t really say much more without spoilers.

Have you tried Audible? Do you like listening to Audio books and podcasts? You can sign up to try Audible for free for 30 days. Then it’s £7.99 per month which buys you a credit which can be used on any audio book, no matter what the cost. There is no commitment and you can cancel at any time.

As well as your credit you also get exclusive member only deals and unlimited listening to 1000s of podcasts, audible originals and audio books. I am an affiliate for Audible so if you do sign up I may earn a little money with no extra cost to yourself. Thank you for supporting my blog. 6 thoughts on “The Wrong One, a Novella by Dervla Mc Tiernan”