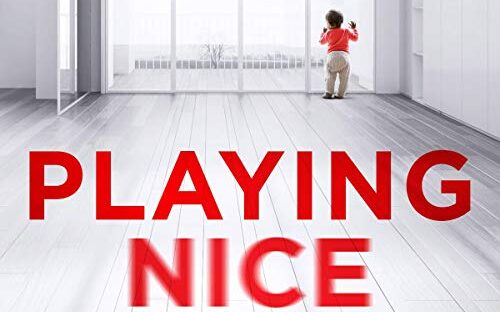 This is a review of my latest listen from Audible, Playing Nice by JP Delaney.

Pete Riley is a stay-at-home dad; his partner, Maddie, works in advertising. After Pete drops two-year-old Theo off at nursery one morning, he’s politely accosted by a man who looks just like Theo.

The man, Miles Lambert, breaks the devastating news that Theo is in fact not Pete’s son, but his – the two babies got mixed up at hospital and Miles and his wife, Lucy, now have the Rileys’ son at home. They’ve already carried out DNA testing to prove it.

The two couples agree that, rather than swap the children back, they’ll try to involve each other in the children’s lives. But a plan to sue the hospital triggers an official investigation that unearths some disturbing questions about just how the babies got mixed up.

And when Theo is thrown out of nursery for hitting other children, Pete and Maddie have to ask themselves: how far do they want this arrangement to go? What are the secrets hidden behind the Lamberts’ smart front door? And how much can they trust the real parents of their child – or even each other?

My Review of Playing Nice

This is the first JP Delaney book that I’ve read, and from reading the reviews on Amazon it seems that it was not so well received as some of his other books. Without anything to judge it by I actually enjoyed Playing Nice.

As a parent it would be my worst nightmare to find that my baby was swapped at birth. This story follows what happens when these two families find out that they were bringing up the wrong children. It starts off quite amicable, the shock of the discovery of the swap doesn’t seem to throw anyone off completely. Then it takes a more sinister turn and you are bombarded with one bad thing after another.

The characters are not really likeable, except for the one Dad Pete. This makes it hard to relate to their pain as the story unfolds. But it doesn’t retract from the horror and the action. The ending was way over the top and utterly enjoyable. It was a definite page turner, I couldn’t wait to see how it was all going to work out.

The book touches on a fair bit of mental health issues which may be a difficult read for some.

This post contains affiliate links which if you click and go on to buy you may earn me a little money at no extra cost to yourself. Thank you for your support.