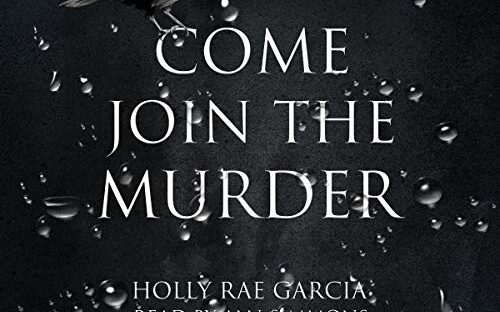 I asked if I could review Come Join the Murder by Holly Rae Garcia and received the e-book in return for my honest opinion of it.

Rebecca Crow’s four-year-old son is dead, and her husband is missing.

Divers find her husband’s car at the bottom of a canal with their son’s small, lifeless body, inside. The police have no suspects and nothing to go on but a passing mention of a man driving a van. Guilt and grief cloud Rebecca’s thoughts as she stumbles towards her only mission: Revenge.

James Porter knows exactly what happened to them, but he’ll do anything to keep it a secret. James didn’t plan to kill Rebecca’s son, but he’s not too broken up about it, either. There are more important things for him to worry about. He needs money, and his increasing appetite for murder is catching the eye of a local detective.

My Review of Come Join the Murder

When I read the blurb of this book (Above) I was expecting a heart wrenching story about a Woman’s life after the death of her husband and son. It mentions revenge, but I was shocked by the extent of revenge she took. I don’t want to give too much away but it soon became apparent that the main character Rebecca Crow was more than a little ‘unhinged’ after the tragedy.

Yes, I felt sorry for her, but I also hated her for single mindedness. I don’t usually enjoy books where I don’t like any of the characters, but I’ll make an exception for this one.

The other main character was James, the murderer. His actions were equally as shocking, but more expected than Rebecca’s. It was obvious that there would be a confrontation between the two at some point but the mystery was where and when and how was all of this going to end.

I was hooked from the beginning. The writing was really good and I was grabbed by the story even though it was a little more horrific and gory than my normal reads. I needed to know what was going to happen and found I got through this book really quickly. It was not a slow to digest book, it was more of a hungry for the ending type of book.

The narrator was great for the story, she captured the tone of the area and the characters perfectly.

This book reminded me of James Herbert who I used to read as a young adult. It was a scary, horrific page turner.