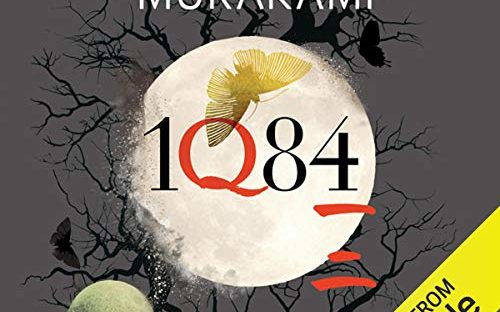 I have read Haruki Murakami before so I am well aware of his way of writing. Translated into English it always reads a little different. And his ideas are less than ordinary. I’ve wanted to read 1Q84 for a long time, ever since I finished reading The Wind Up Bird Chronicles a few years ago. I thought it would be good to listen to the story on Audible, but with all three volumes it came to just over 46 hours. (The last 28 minutes are an interview with the translators.)

This is the real world, there is no doubt about that.

But in this world, there are two moons in the sky.

In this world, the fates of two people, Tengo and Aomame, are closely intertwined. They are each, in their own way, doing something very dangerous. And in this world, there seems no way to save them both.

Something extraordinary is starting.

First of all you have to realise that this is a translated Japanese book, so things may not read (or listen) as smoothly as some stories. There is a fair amount of repetition, but it could be translation, it could just be the way Murakami likes to get his story across.

I found it all a bit long winded at times. In fact there were times that if anyone mentioned the moon one more time I’d start howling at it. But, some things are real important to the story and if that’s the way Murakami likes to put it across then I guess that’s something you have to deal with.

Murakami likes talking about sex, he can be quite crude at times, a lot of the language used is very explicit. But he also knows how to make a distinction between the different types of sex, so you really get an idea of how the character is feeling about it.

One thing that Murakami excels at is characterization. I love the way he brings his characters to life, whether it’s physical description or his delving into the very depths of their being. It’s hard not to connect with them, even if they remain nameless. After reading, as well a the main characters, I also feel I know The Dowager and Tomatsu like old friends.

He also describes their surroundings in great detail and I think it’s this attention to detail which add to the length of the story. Sometimes I found myself wishing he’d just get on with it, but now, looking back, I’m glad I felt such a part of the story, knowing all the little details and living it too. No matter how surreal it all was.

That’s the next point. Now, I’m all for a bit of science fiction or fantasy, a pushing of the boundaries of belief. But Murakami does this in way which makes you think, what the heck is going on sometimes. At other times, it all seems very normal. The more surreal points are left hanging, keep a hold of your imagination, you will need it. Different dimensions, The phantom NHK collector, The Little People, Air Chrysalis, two moons, Mutha, Daughta (forgive my spellings, I was listening not reading!) Any reader can draw their own conclusions because none of these are given explanations. I’m not saying I didn’t enjoy all of this, but at times I was a little baffled to say the least.

All set in one year, 1984 (or is it really 1Q84?) You can read (or listen) to the book in the three separate volumes if you wish to break it up a little. I wanted to keep going and get it all sorted. Maybe even find some elusive explanations? It starts with the main female character Aomame, who jumps from a taxi on an express way and climbs down an escape ladder. The impression is that she is going to some sort of job interview, when in fact, she turns out to be a deadly assassin with a clever way of killing.

Another main character is Tengo, a part time teacher, part time novelist who ends up being roped into re-writing a book by a strange young girl.

The two characters once went to school together many years before. They never spoke to each other, but did hold hands once. They would also see each other walking the streets, Tengo with his father who was a television license fee collector, and Aomame with her Mother who was out preaching as a ‘witness.’ Tengo made some kind of reconciliation of sorts with his dying father during one part of the book. Murakami has such an interesting way of exploring relationships of all kinds.

I thought the narrators where really good, the three main ones where the female Aomame voiced by Allison Hiroto, Tengo by Marc Veitor and the ingenious baddie Ushikawa. Probably not everybody’s cup of tea but I enjoyed the American Private Investigator spin put on this character. He was ugly inside and out, but I still felt a little sorry for him in the end. Ushikawa is mentioned by Tengo earlier on in the story but when he starts to narrate in the third book he is everything you expect him to be.

This is a long book and it takes some getting through. There were times when I thought that maybe I didn’t want to carry on. Or that maybe the whole story could have been told in half the time. There was certainly lots that could have missed out, but i think they would actually have been missed. At the end I was glad I badgered on with it. It was no great surprise ending, or maybe it was, it could have gone any way really, but it was satisfying and, well, nice.

This won’t be for everyone, but if you want to indulge in something a little different and you have 46 hours to spare, then this could be just what you are looking for. It has been compared to 1984 but I don’t see that really. 1Q84 is more of a different reality rather than a dystopian future. And to be honest, we don’t even know if 1Q84 is dystopian.

Not for the prudish or those without a good imagination that is willing to explore the more surreal. I think everyone will come away with a different opinion of this book.

I have just read this fabulous quote which sums up Haruki Murakami in an interview from The New Yorker.

I’ve hardly ever thought about the theme or point of the the stories I write. I’ve had a number of opportunities to discuss my work with college students in their classes, and the students always seem to end up confused, because they cant find the theme or the point of my stories. But that doesn’t bother me at all.

Discolsure: I bought this book myself, but this post contains affiliate links.