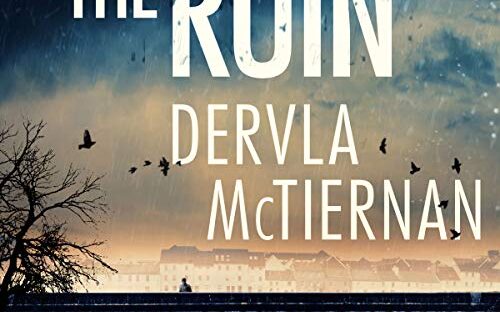 I recently read a novella by Dervla McTiernan, The Room mate which was an introduction to the Cormac Reilly detective series. I really enjoyed it so I decided to jump in with book 1, The Ruin.

Cormac Reilly is about to reopen a case it took him twenty years to forget.

On his first week on the job, Garda Cormac Reilly responds to a call at a decrepit country house to find two silent, neglected children waiting for him – 15-year-old Maude and five-year-old Jack. Their mother lies dead upstairs.

Twenty years later, Cormac has left his high-flying career as a detective in Dublin and returned to Galway. As he struggles to navigate the politics of a new police station, Maude and Jack return to haunt him.

What ties a recent suicide to the woman’s death so long ago? And who among his new colleagues can Cormac really trust?

This unsettling crime debut draws us deep into the dark heart of Ireland and asks who will protect you when the authorities can’t – or won’t. Perfect for fans of Tana French, Jane Casey, Liz Nugent, Susie Steiner and Caz Frear.

My Review of The Ruin

I listened to this book on Audible and I always enjoy listening to Aoife Mc Mahon, but it’s always good idea to listen to a preview first just to make sure you like the narrator. This post contains affiliate links which means if you click through and purchase something I may earn a little money, but it will cost you no extra. Thank you so much for supporting my blog.

I’m glad I chose this series because I liked Cormac Reilly right from the beginning. He didn’t really do much in the novella I read before, but in The Ruin he was the star of the show.

The book was slow to start as we got to know the characters, but it soon picked up pace and we learnt so many secrets, some a little predictable, others not so much. It was a really good read and I just wanted to know what was going to happen next.

The story jumps from the suicide of young man, Jack and the story of his partner, to the story of his sister and what happened in the past. It’s complex enough to keep you interested but flows along nicely too.

Jack and his sister Maude were children discovered by Cormac in a house with their dead mother who had taken an overdose of heroin. Maude runs off to Australia, but Jack is adopted and leads a normal, happy life with very little memory of his childhood trauma.

Cormac has to unravel why Jack decided to take his life, if indeed his mother took her own life all those years ago, and if there is any connection. We also find out Maude’s back story.

I’m really looking forward to listening to the second book in the series now.

Have you read any of Dervla Mcteirnan’s books?

1 thought on “The Ruin by Dervla McTiernan, book review”