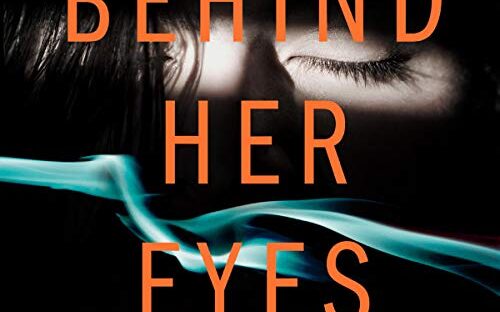 I saw that Behind Her Eyes was a new series on Netflix and remembered that it was a book on my TBR (to be read) pile. So, before indulging myself in the television series I got into the book first.

I listened to Behind Her Eyes by Sarah Pinbourough on Audible. Links in my post are affiliate links and may earn me some money if you click through and buy, but they won’t cost you any extra so thank you for your support.

Behind Her Eyes The Blurb

Exploring the dichotomy between one’s inner and outer self is central to Behind Her Eyes. When a vulnerable woman is drawn into the lives of an enigmatic couple, she finds it hard to differentiate between reality and what truly lies beneath a seemingly perfect exterior.

And whatever you do, don’t give away that ending….

Since her husband walked out, Louise has made her son her world, supporting them both with her part-time job. But all that changes when she meets….

Young, successful and charming – Louise cannot believe a man like him would look at her twice, let alone be attracted to her. But that all comes to a grinding halt when she meets his wife….

Beautiful, elegant and sweet – Louise’s new friend seems perfect in every way. As she becomes obsessed by this flawless couple, entangled in the intricate web of their marriage, they each in turn reach out to her. But only when she gets to know them both does she begin to see the cracks…. Is David really the man she thought she knew, and is Adele as vulnerable as she appears? Just what terrible secrets are they both hiding, and how far will they go to keep them?

As it says above…don’t give away the ending…so I’ll do my best not to.

A lot of people have said they were disappointed with the ending but those are the ones that have seen the television series. I’ve not seen it yet, so I don’t know how much of it is the same, or if it comes across the same.

But I digress, whether you believe in lucid dreaming or not, this book has a strong storyline based on it. So don’t get into it if you are not prepared to believe the impossible (or possible, whichever way you look at it.)

The characters are all very different but likeable in their own ways. Even Adele, perceived as the baddie, will have you feeling sorry for her. David is just totally caught in the middle, he feels trapped by the woman he once loved but he doesn’t understand why she is so different to the girl he once loved so much. Louise is the most ‘normal’ character but even she is tinged with betrayal.

In the book the events all happen very quickly, in the space of just over a month, which doesn’t seem to tally with all the things that happen. The lives of the characters change drastically in such a short space of time. I guess we know deception of this degree can’t go on for so long, but I found the fact that Louise had given up smoking and slimmed down so much even more unbelievable than the fact that she could master lucid dreaming. Maybe it’s different in the television series?

The ending is a bit of a shocker, especially in the book. You kind of know Adele’s plans, but do you know what has really happened? I don’t want to give any more away.

If you are intrigued then I will say that I got through this book very quickly and I did enjoy it. The ending totally baffled me and I’m still not sure it actually worked as a story on the whole. But, suspend belief in normal things and you will enjoy this book.

Now, to watch the television series.

You can buy the book on Amazon

Or in My Bookshop

A Place To Read – My Book Reviews

3 thoughts on “Behind Her Eyes, Sarah Pinborough. A book review.”