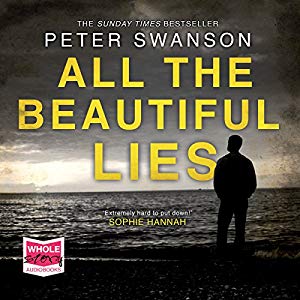 All the Beautiful Lies

On the eve of his college graduation, Harry is called home by his step-mother Alice, to their house on the Maine coast, following the unexpected death of his father.

But who really is Alice, his father’s much younger second wife? In a brilliant split narrative, Peter Swanson teases out the stories and damage that lie in her past. And as her story entwines with Harry’s in the present, things grow increasingly dark and threatening – will Harry be able to see any of it clearly through his own confused feelings?

Harry is devastated by the sudden death of his father, but was it really an accident. And who is the strange young girl who turns up at the funeral that no-one seems to know. As we follow Harry’s story of investigation into what happened to his father we also delve into the history of his Step-Mother Alice. Alice lost her mother as a teenager and soon after began a relationship with her step father. They kept it secret, but some local residents had their suspicions. As the plot thickens, Harry discovers the stranger at the funeral was having an affair with his father, but soon after his discovery she ends up dead. Harry suspects his Stepmother has something to do with his Father’s and his mistresses deaths but can she really be guilty. As we discover, her past is not so innocent. In the second part of the book we discover the murderer and hear of a much darker history of the Stepmother Alice. Then to top it off there is even more twists to end the story.

A dark psychological thriller which had me gripped from the start. An interesting take on a very difficult to talk about subject, interspersed with mystery and murder. It stirs up a lot of emotions and will not be an easy read for anyone who has been a victim of child abuse of a sexual nature.

I listened to All the Beautiful Lies on Audio Book and I get my books from Amazon Audible. I love audio books, I can listen while I crochet or even while doing the housework, it means I don’t have to put down my book. You can get any type of books in Audio, fiction or non-fiction. I love audible because you get the chance to listen to an sample before you buy. I like to do this because I have to be sure I like the voice I’m going to be listening to. Each month I get a free credit to buy any book I wish which can be great value. One month I chose the entire works of Arthur Conan Doyle’s Sherlock Holmes read by Stephen Fry. I’ve got a lovely library of audio books that I can return to at anytime if I wish. Boo has just decided that she likes listening to books to, so I can put the app. on her phone and she can listen to children’s books. When you sign up to Audible you get the first three months at half price and then it’s £7.99 a month which is usually less than the price of the book you can get with your monthly credit. It’s up to you if you buy more, I tend to stick to the one a month, although sometimes they have some amazing offers starting from just 99pence. Audible also offers some exclusive podcasts to listen to for free from the likes of Stephen Fry, David Mitchell and Sue Perkins to name a few. Whether you want to listen to comedy, drama or history there are so many genres to choose from.

Disclosure: I am an Amazon Affiliate and this post contains affiliate links which will make no difference to your costs but may earn me a little money if used. Thank you
Please follow and like us: